Launching the LGBTQ+ debit card, just in time for Pride 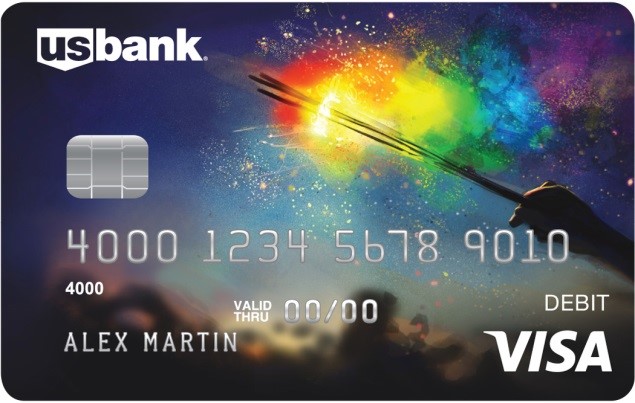 U.S. Bank, as part of its ongoing diversity and inclusion efforts, launched its Pride-inspired debit card.

The launch of the new Pride U.S. Bank Visa Debit Card design aligns with the LGBTQ+ community as they gear up for Pride celebrations across the country in June. The card’s design comes from the heart. LGBTQ+ ally and artist Olivia Ogba of Atlanta submitted her original art – featuring sparklers filling the night sky with rainbow colors – to U.S. Bank’s LGBTQ+ debit card design contest in January, along with more than 400 other artists. The contest was part of U.S. Bank’s continuing efforts to show support for LGBTQ+ and other communities.

Ogba is an ER medical transcriptionist studying to get into medical school, but healthcare  is just one of her many passions. Her love of art and support of the LGBTQ+ community inspired her to enter the bank’s contest.

Her artwork was selected with two other designs as the finalists in the contest, and all three designs were voted on by the public in February to determine the winner. Although it was a close contest, Ogba’s digital painting – created on Photoshop using a Wacom tablet – received the most votes, making her artwork our new U.S. Bank Visa® Debit Card Pride Design.

Ogba said she is “basically screaming” (in a good way) over the fact that her art has become a U.S. Bank debit card, noting it would be exciting to see someone using it. “It will be sort of an unspoken, ‘We support.’ It makes me happy!” she said. She also won $7,500 for her winning design, which she says she will use toward her medical school application and as a down payment for a place to live.

Ogba originally created the design to show support for the LGBTQ+ community after the U.S. Supreme Court ruled in June 2015 that same-sex marriage was legal nationwide. It was purposefully patriotic, inspired by a fireworks show she attended on the Fourth of July. “That’s what America stands for – the ability for everyone to go after the American dream without any sort of discrimination,” she said. Ogba has never been to a large Pride celebration. “I’ve only done small university Pride events before,” she said. “This year, I’ll probably go (to a big event).”