From a “picture perfect” life to living with authenticity 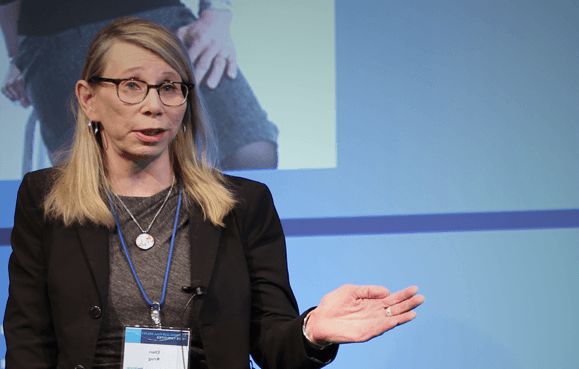 Growing up in Iowa in the 1960s and ‘70s, Ellen “Ellie” Krug had no positive role models for what she was feeling and not even a concept of what it meant to be “transgender.”

The idea of a person’s gender not matching their body was completely foreign and the word transgender didn’t gain popularity until the 1990s. The first time Krug (pronounced Kroog) had an inkling of her gender dysphoria was when she read an article in Life magazine about Christine Jorgensen, the first person in the United States to become famous for sex reassignment surgery, shortly after World War II.

“She was jumping out of airplanes as a ranger in WWII, wearing women’s underwear under her uniform,” Krug said. “I thought, ‘I can relate to that.’” U.S. Bank recently hosted transgender advocate Krug, who spoke to employees about her coming out as transgender and about being an ally for marginalized people. It was part of the bank’s activities around National Coming Out Day, an annual celebration of the LGBTQ community observed on Oct. 11. (Note to reader: For ease of reading, Ellie has agreed that we can use her former name and male pronouns in this article.)

At 15, “Ed” Krug struggled with his gender identity, even as he fell in love with his high school sweetheart, Lydia. “I thought that would be the end of it,” Krug said. “What I didn’t understand is that authenticity is like a worm that just won’t leave your gut. It tugs and pulls, and there is something there that just won’t leave you alone.” Ed Krug eventually married Lydia and the couple had two daughters together. He had what many would consider a “picture perfect” life in Cedar Rapids, Iowa.

“As a man I had created the best life I could create,” Krug said.

“I so loved my high school sweetheart, we had two beautiful daughters, I had a successful law firm, country club memberships and money in the bank. “But I knew if this ‘thing’ about me got out, I would lose everything.”

Ed Krug grappled with profound unease for years, even while coping with the pressures of being a civil trial attorney dealing with high-risk, high-loss, multimillion-dollar litigation. Finally, following years of therapy and internal angst, Krug had a watershed moment after the 9-11 terrorist attack. That night, he was in church with his family, and he couldn’t stop visualizing that he was on one of the planes, seeing the towers up ahead.

“I was thinking, ‘What would my last thought be before American Airlines aluminum hit the Twin Tower steel?’ And it hit me. I’m going to die a coward,’

Krug said. “I had never put those thoughts together and it was overwhelming.” It was at that moment that Ed Krug began the long, sometimes painful transition to Ellen Krug. She left Lydia after several years, and in May 2009, sent an email to 200 lawyers and judges saying, in essence, that she wasn’t really male, but a female. After her administrative assistant hit the send button on the email, Krug just waited. Then she started getting emails and phone calls.

“You know what? They were overwhelmingly positive. I even had a federal judge who wrote to me and applauded me for living bravely,” Krug said. A year later, Krug set three goals for herself: Write a book and get it published; open a nonprofit; and have some surgeries. She had accomplished all three by early 2013, when her book, Getting to Ellen: A Memoir about Love, Honesty and Gender Change, was published. (Krug’s book is available on Amazon, Kindle and other media.)

Krug moved to Minneapolis and founded Call for Justice, LLC, a Minneapolis legal nonprofit that was conferred an American Bar Association award for innovatively increasing legal access. She served as the executive director of Call for Justice from 2011-2016. Krug now speaks, trains and consults on diversity and inclusion topics to governmental entities, court systems, corporations, law firms, social service organizations, and colleges and universities. Her website provides descriptions of her training courses, workshops and retreats, and a blog where she shares her thoughts on everything from Martin Luther King Day to Caitlyn Jenner.

Krug knows she comes from a place of privilege. “I happen to be white, I had money and I’m educated, so I know how to do things. But also, I’m relentless. I have a work ethic that serves me well.”

She said she lives with “great gratitude,” and calls herself a hopeless idealist. She really wants to help people see that all humans are marginalized by other humans, and that we need to overcome our fears of “other” and act with compassion. “I’m a woman who happens to be transgender,” she said. “I speak about how humans treat other humans. I believe that for things to change, it won’t work by banging people over the head. Instead, we have to inspire them to act with greater compassion for others and for themselves.”